Are you dreading the annual employee recognition program? Spice things up! Plan a themed awards ceremony to celebrate the December 2015 release of Star Wars: Episode VII – The Force Awakens.

Here’s eight awards the staff will brag about long after the presentation.

Is there an outstanding, well-respected lady in the office? Give her with The Leia Leadership Award in honor of Princess Leia, the strong leader of The Rebel Alliance.

Give a shout out to an employee who has shown significant improvement and progress in the past year with The Luke Skywalker Progress Award. They don’t have to be a farm boy turned Jedi fighter, but rather an employee who reaches goals consistently.

We all know that co-worker who can take a stack of indecipherable reports and somehow translate it into something useful. They’re a great candidate for The C3PO Interpretation Award, since this Star Wars icon is known for translating languages and being detail-oriented. 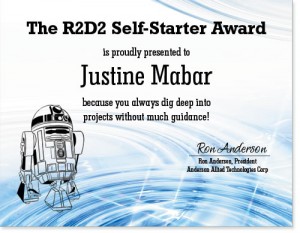 Perpetually motivated, go-getters deserve to be given a pat on the back. The R2D2 Self-Starter Award celebrates those employees who dig deep into projects without much guidance.

The there a supervisor who has a knack for teaching others new processes and strategies at work? Present them with The Yoda Coaching Award, a homage to the great teacher, Yoda. Cherish the award, they will!

You know that employee who always gets people laughing at a boring meeting or brings doughnuts to the office for your birthday? They deserve The Chewbacca Congeniality Award since they’re incredibly loyal and likable, just like Chewy. 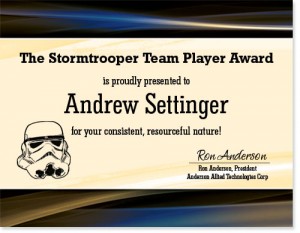 Is there a department or team in the company that consistently follows comes out on top? Each member of the group deserves The Stormtrooper Team Player Award for their compliant, resourceful nature.

Every workplace has that one person who everyone wants to partner with on projects. This helpful, friendly employee deserves The Han Solo Charisma Award.

Are you ready to print your Star Wars themed awards? Paper Direct offers everything from award certificates and folders to engraved plaques and trophies to make your awards recognition program truly out of this world!

What to Say When Presenting an Award [Script]